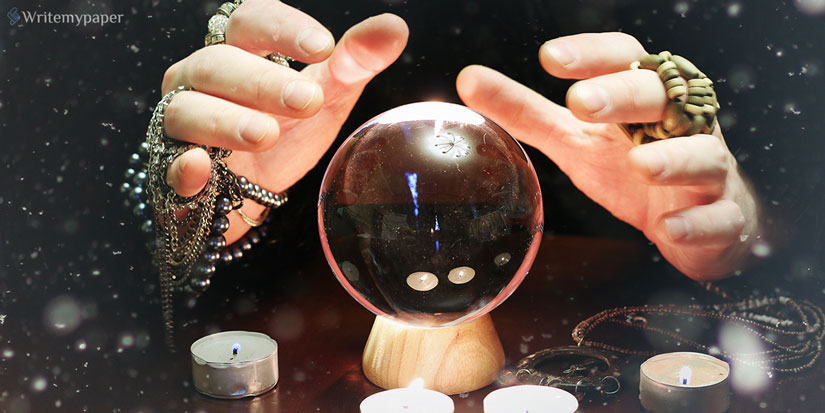 Have you read “Twenty Thousand Leagues Under the Sea” by Jules Verne? Or, maybe, you are a fan of dystopian novels? What I’m asking you to do at the moment is to remember at least one story where characters use advanced technologies we can’t even dream about, or a story which takes place in the distant future.

Now try to remember how minutely the author of the story you chose describes a revolutionary device or a social life of our grand-grand-grand-children (that’s in about 70-80 years from now). Have you ever wondered what helped writers imagine so vivid pictures of events and images of people that they never saw?

Of course, some literary critics will tell you that most of the characters and events that make classic futuristic stories are actually the reflections of their creators’ past experiences.

Yes, I can agree that the design of Captain’s Nemo hi-tech submarine can be taken as a reflection of Jules Verne’s ideas of improvement of ships at his time. But I bet there must be something else. Something like a rare gift to predict what will happen to the world you’re watching at the moment. What else can explain the fact that Jules Verne’s sci-fi visions could influence the development of marine technology?

In this case, that’s what I would call “predictive writing”. But I’d like to dedicate this post to considering this concept in more detail.

And from the three different angles.

Defined as the study of mostly literary texts, this science can certainly help us provide a clearer explanation of what predictive writing is in its regard to literature. By the way, you can find a broader definition here.

As the name suggests, the main idea and purpose of predictive writing is prediction of possible future happenings. But what distinguishes such prediction from mere fantasizing is the solid foundation underneath the expressed ideas, consisting of their author’s real-world knowledge and well-analyzed life experience. Naturally, author’s analytical thinking and creativity also add to the rationality of those ideas.

So, if Jules Verne hadn’t lived in seaside Nantes and hadn’t communicated with people whose lives were so tightly connected with sea voyages, we wouldn’t have known him as the world’s second most translated novelist.

Speaking about Orwell’s dystopian stories, it’s also worth noting that they would have never seen the world but for the writer’s risky and nomadic lifestyle, as well as an original talent to put his experience on paper. Besides, you do know that this man was courageous enough to predict the date of the grand dystopian changes in our world – the year of 1984.

Even if you consider him a pessimist (that’s your personal right, so I’ll try not to violate it), you still won’t disagree with me when I call him a prophet. But I believe we both wish his prophecy never to be fulfilled.

Nevertheless, you don’t need to be a Jules Verne or a George Orwell to make your writing predictive. When you want an official trailer of a promising film, you can try to write a predictive review. By the way, this can be a superb idea for your next blogpost.

Your English professor may also use predictive writing as an exercise to train your creative and analytical thinking.

You have a smartphone, right? Well, this question can look really weird, but I know a few guys who are still satisfied with button cell phones. Never mind. So, whenever you type a message, your smart gadget offers you three (sometimes more) words or even phrases to make the whole texting process faster and more convenient.

Did you know that you could disable this option? Yeah, I don’t know why I would do that. But sometimes it plays against me. I don’t even want to tell you which words I got for “meditating” and “buttered”.

Yet let’s get back to the topic. Actually, the words and phrases the autocorrect throws out to you are perfect examples of the so-called predictive texts. Your phone makes predictions based on the vocabulary embedded in its system and the most frequent context of your messages.

Artificial intelligence in its probably simplest but most practicable form. And intelligence generally implies the ability to make predictions based on real knowledge and analysis of a current situation.

Words are powerful, and that’s why “1984” and “Animal Farm” gave me goosebumps, when I was reading these books. There are just the probable scenarios of our future, these are just thoughts of a pessimistic philosopher. But they are expressed by words that you can read and comprehend. Just like you read the slogan of Snickers and go buy it because you do believe it’s nutritious.

I don’t want to believe Orwell, seriously. But I realize he might be more than half right if people don’t change in the near future.

But in this paragraph, I’d like to tell you some more positive things. You can practice predictive writing to describe how you see your own life. Psychologists state that does help feel more confident in the tomorrow and just happier.

Even if you realize you can’t turn your life into Cinderella’s or Sindbad’s fairy tale, why not just write something like that in your notebook? Therefore, you program yourself for something positive and, well, certain, because you know how the stories of these characters end.

Agree that it’s still much better than trying to find something that would spoil your mood and deprive you of motivation. I do know such guys too, and I’m not fond of communicating with them.